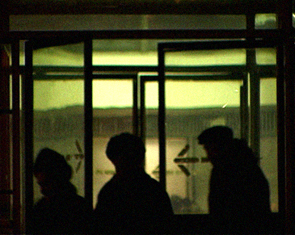 Jarmark Europa at Warsaw’s Dziesieciolecia Stadium, one of Eastern Europe’s largest bazaars and a centre for small trade that doesn’t appear in any tax declarations. The traders come from a variety of countries in the former Soviet Union. They transport their goods to Warsaw or other cities west of the ex-USSR in unmistakeable bags. In Russian, these traders are known as “chelnoki”. The word “chelnok” means “weaver’s shuttle” and graphically describes their peripatetic lifestyle. Most of them have exchanged their settled existences for a life of constant movement between their home­town and the bazaar. Many are academics who earn too little to sur­vive. Others are unemployed or retired. The “chelnoki” are pioneering entrepreneurs in a changing society. It is re­mark­able that it is mainly women who prop up their families in this way. JARMARK EUROPA is about two of these women, about me and about how this film came about.