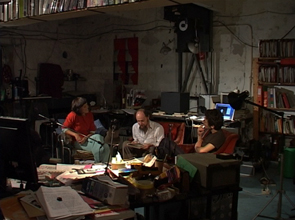 a chain of interviews

in the works is a documentary series, a filmic investigation of the reality, possibilities and limitations of collective action. The communicative process of researching becomes the films' focus. We have begun a series of interviews in several European countries. Members of the different groups travel with us to meet and engage with other collectives.

Through nine different encounters, an image of cooperative practices in various areas of society emerges. We explore how self-organization is perceived, how it functions, and how each group pursues its principles despite practical constraints. Each episode uses a different filmic form appropriate to the context and the group portrayed.

Funded by Kulturstiftung des Bundes, Rosa-Luxemburg-Stiftung and Stiftung Menschenwürde und Arbeitswelt and filmed between 2008 und 2018 thanks to the support of copines et copains in Paris, Palermo, Firenze, Bologna, Berlin, Warszawa, Málaga and Hamburg.